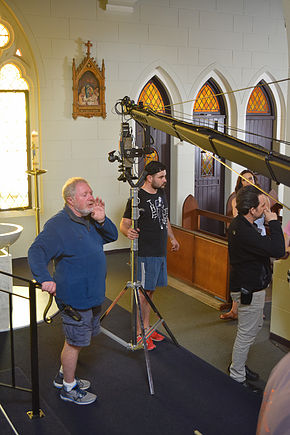 A MULTI-MILLION DOLLAR  production has started filming in Murwillumbah this week and there’s a few high-profile celebrities cruising around town.
The Weekly was invited to visit the busy and secret set inside the Sacred Heart Church by producer Jim Robison on Tuesday this week.
Mr Robison said the film is titled Scarlett, which he said was a supernatural thriller with a $2.7 million budget and stars up and coming Aussie actors.
“We’re shooting over five weeks at several locations including Lennox, Mullumbimby, Murwillumbah, Byron Bay and a property outside Bangalow as well as local cane fields,” he said.
Mr Robison said the production had attracted several high-profile names including actor Lisa Chappell of McLeods Daughters, director Dee McLachlan, guest assistant director Bob Donaldson who helped direct Mission Impossible II in 2000 and production designer Robert Webb – responsible for several notable Australian films including Wolf Creek and Tomorrow When the War Began.
In a major coup, the film also managed to secure the services of Oscar nominated composer Christopher Gordon, who was nominated for his work on the Russell Crowe maritime epic Master and Commander.
The man behind Scarlett is locally raised producer and actor Blake Northfield, who many may remember from Home and Away fame.
Mr Northfield told media sources that the production was “overflowing” with end-to-end film talent, including writers, cinematographers, technicians, actors, and special effects professionals.
“I grew up in the area and I always said ideally if I could work back here in this industry, that would be my dream,” he said.
“We chose this location to lay down a platform for the film industry and show the world that the area’s depth of diverse locations is only exceeded by its offering of creative talent.”
Mr Robison said Scarlett was scheduled for an international release sometime in 2017 and will be sold to 25 countries, including a planned showing at next year’s Berlin Film Festival.
It will also feature a special premiere in Byron Bay and run in Australian cinemas following the international release.
“Blake and I raised the finance when we went we spent our life savings travelling to the Cannes Film Festival, then LA then finally Moscow,” Mr Robison said.
“With persistence and a killer script we got the assistance of Russian private equity investors we met through contacts we made in Cannes film festival. We hope to sign a ten slate $50M joint venture after release of this first film with the Russians which will be the largest JV in Australian cinema history with Russia and a landmark deal, providing hundreds of Australian jobs for local film crew,” he said.
The production companies involved in the film include Headgear Films (UK), Bronte Pictures (AUS), Maddfilms (AUS).